Aaron Isip landed in Manila from France, ready to make an impression. His pop-up (December 7-11) in collaboration with F&B concept developers, the Moment Group, took us all by storm. Within a few hours of posting about it, on social media and online, bookings started to pile up and seats were running out. Immediately, I jumped to call and reserve, knowing I did not want to miss out on this. Having tried Aaron’s food in Z Kitchen Gallery and Dix-Huit in Paris, I could not wait to see what he would do—his use of Filipino flavours. I was thrilled that he came home and decided to present this innovative showcasing of local flavours. Talking to the man himself, Chef Aaron tells me more about his inspiration and decisions for the pop-up's menu.

What was the concept behind the pop-up?

The concept—focusing on our islands' bounty—local ingredients, fruits of the season, fish and seafood, minimal use of local meat because these are what our country has an abundance of.

What was your basis or inspiration in creating the pop-up’s menu?

I went back to El Nido, Palawan a little less than a month before the pop-up dates and got some inspiration there. I wanted to feature a casual, island-style (if you will) tasting menu that showcases our local ingredients that do not usually get the spotlight in Manila restaurants.

Since the menu was slightly different each day, how did you decide what to cook?

Yes, the main fish and meat dishes would change/alternate during the 5-night stint. Live Lapu-Lapu and Yellowfin tuna cheek for the fish, Suckling Baby Goat 'Cabrito' and Local Squab for the meat. I wanted to focus on fresh seafood and fish so most of the ingredients were purchased live—like live Mantis Shrimp, Halaan, razor clams, Lapu-Lapu, etc. I had to see what was available this season and I just worked with what the season would offer. 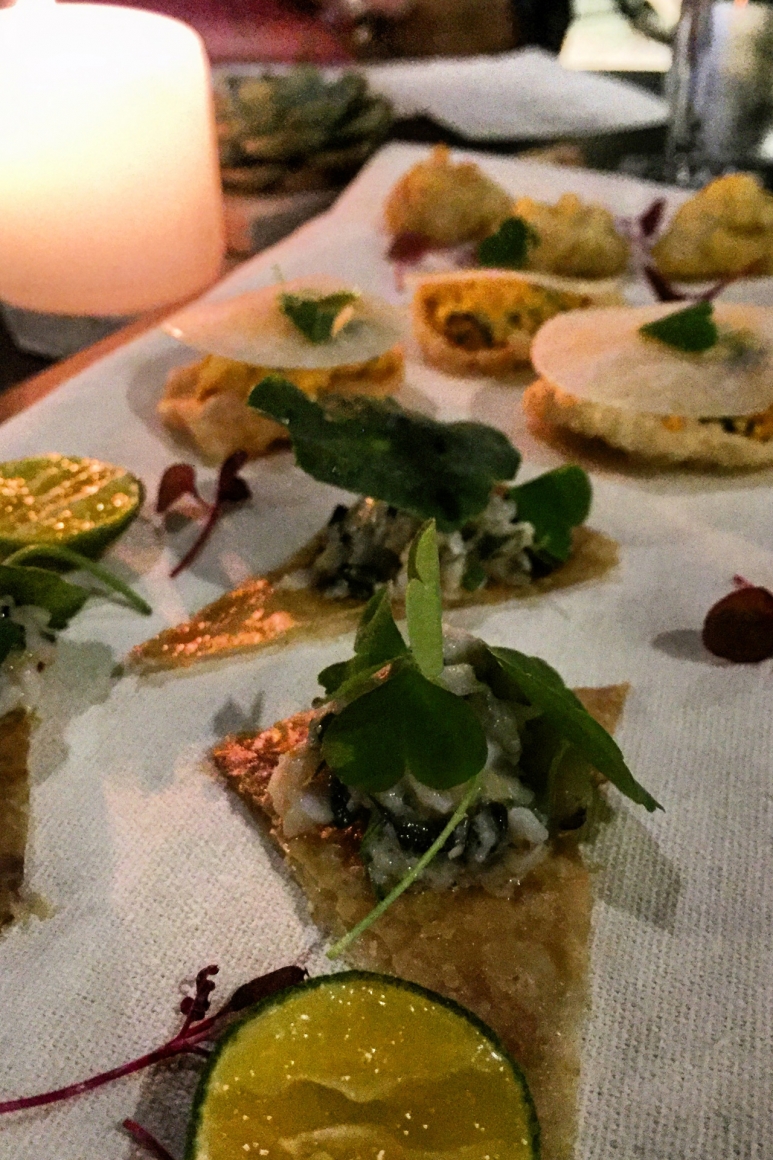 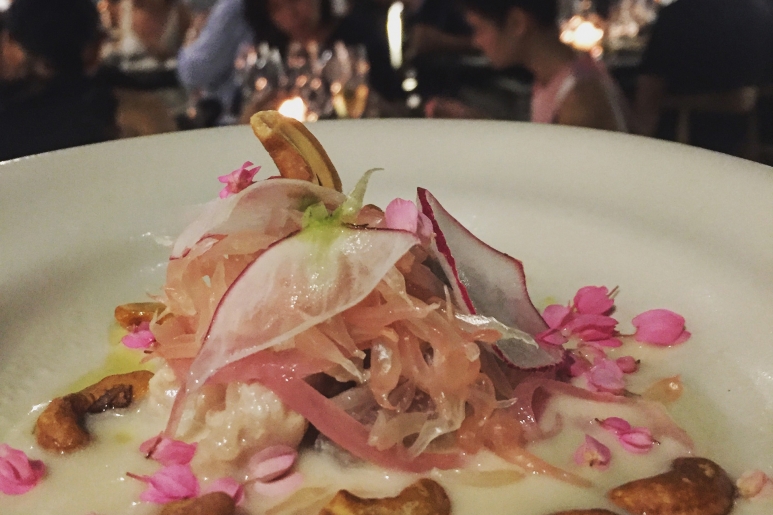 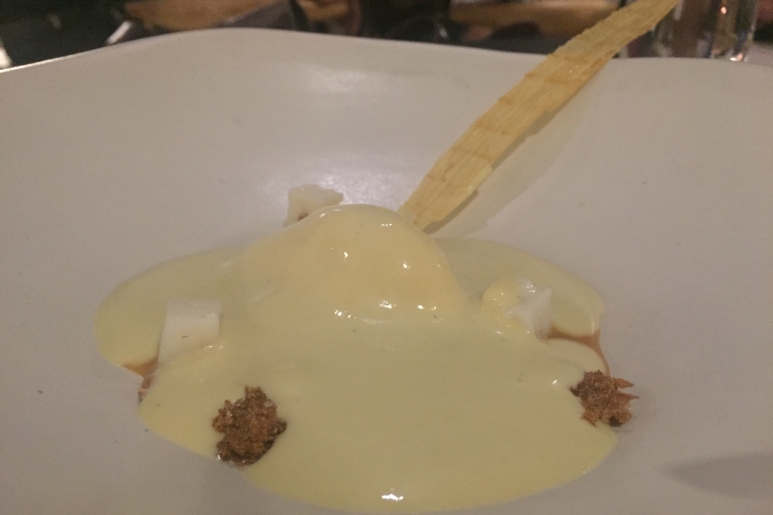 The dinner was a degustation of his creations. From small-plated appetisers to stunning entrées. It was not a re-invention of Filipino classics, but a move to show the country that we have the building blocks to create impactful dishes that no one has seen before, with our ingredients on centre stage.

I spoke with The Moment Group’s founding partner Abba Napa to learn a little bit more about the behind-the-scenes of this pop-up.

How did the pop-up come to be? Why did you want to put it together?

I first met Aaron in Paris years ago at the wedding of one of my oldest friends. She sat us next to each other because she thought we could bond over our shared love of food and dining. When he decided to move back to Manila and put up a restaurant here I thought it would be nice to do a series of pop-up dinners so people could get to know him and experience his style of cooking, which is unique for the Manila dining scene. 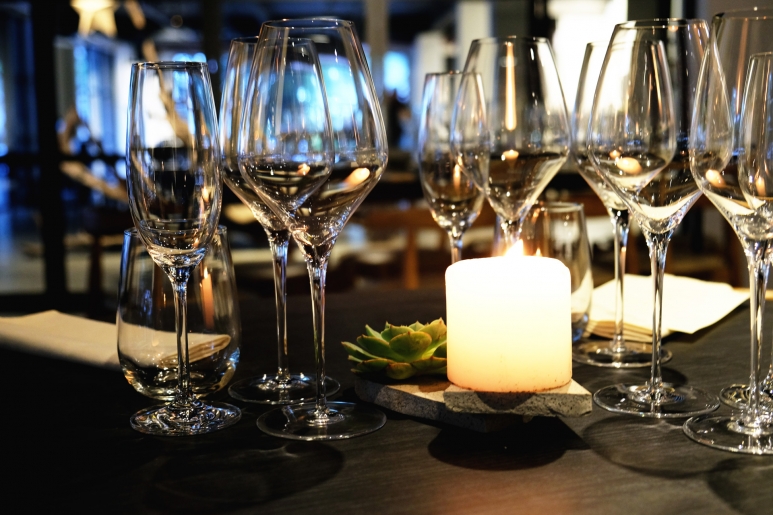 What was the concept behind it?

Aaron was one of the first chefs to do so in the space early this year. Since his calling has been to put up a destination restaurant near the sea, it was only apt that this series of dinners was largely influenced by locally-sourced seafood. Our test kitchen is a relaxed and safe space to get to know one another and discover each other’s styles and outlooks when it comes to food and dining.

How did you, and TMG, collaborate with Aaron to put this together? Did you help with the menu?

We agreed on the overarching idea. Beyond that I left Aaron alone with the menu.  When chefs have a certain unique style I find it is best to give them the freedom to run with their imagination.

I am super proud of the amazing team, from our different restaurants, that volunteered and came together for this pop-up. From day one, I had told Aaron that we would have to put together a volunteer team for the dinners—either interns or team members from Moment—because a week-long dinner required voluminous amounts of preparation.

The team members that came to join us were in large, part from our burger joint brand, 8 Cuts. For the cooks involved in this endeavor, fine dining prep and firing of dishes for a full course dinner was a first. To have them learn it on the spot was an achievement. For the wait staff, this was the first time for them to learn this service style as well. They were led by some amazing young people within the organization: R&D Chef Monica Yang and Operations Development Manager Mike Luna. With the support of The Moment Group, many of Manila’s tummy’s were gastronomically satiated with Aaron’s innovative fusion of flavours. He changed how we taste and view ingredients that have been in our country for countless years. They were suddenly reborn and brought to life again. If he keeps at this pace—focused, passionate and inspired—Aaron will be sure to cook up even more surprises.