Glenda Barretto: First of Her Kind

By MJ Jose September 10, 2015
Esteemed restaurateur Glenda Barretto celebrates Via Mare’s 40th anniversary and her unwavering passion for her craft.

Filipino cuisine is, at present, enjoying its newfound celebrity status in the culinary world. This is unsurprising, if not, a bit of a delayed reaction. Due to the Philippines’ reputation as the melting pot of Southeast Asia, many culinary enthusiasts have been touting Filipino cuisine as the food trend to watch out for. In December of last year, Sterling Rice Group culinary director Kara Nielsen said that the trends would veer away from the sweet and the tame in favour of dishes laced with unusual ingredients and richer flavours. Nielsen added, “In store are dishes and flavours from Northern Thailand, more exploration of Japanese and Korean cuisine, and deeper dives into Southeast Asian. Ditto for Filipino food, which includes delicacies like arroz caldo, a thick chicken rice porridge.”

As we delight in how far the Philippines has come in relation to food, we also look back to acknowledge the restaurant and the woman who have played key roles in putting us on the map. Famed restaurateur and author Glenda Barretto is the heart and soul of Via Mare; 40 years down the line, her fierce passion for all things culinary has not waned in the least. Culinary Legend: She shaped Filipino cuisine into what it is today

The beginnings of Via Mare—Italian for “by way of sea”—date back to 1975. Seeing as there had been very few quality restaurants then, Barretto and a few friends decided to pool their resources together to open a fine-dining seafood restaurant. According to her, entering the restaurant scene in those days was not a difficult feat. There were very few businesses to compete with, and no one was dabbling into seafood. “It was a dream to put up a restaurant,” Barretto shares. “Most of the outstanding restaurants were hotel dining rooms serving continental dishes inspired by Europe. Food back then wasn’t given much attention; in fact, we didn’t have what you call ‘foodies’ at that time.”

A self-taught chef, Barretto takes pride in her contributions in the movement to revolutionise the then-stagnant food industry. Via Mare’s initial ticket to success was the famous Bisque Mediterranean, one of Barretto’s very first dishes. “The one that was very popular at that time was an original soup that I created,” she says fondly. “It was a creamy Mediterranean soup with seafood and pastry crust. Nobody served soup like it back then—we were the first—and it was an instant success.” 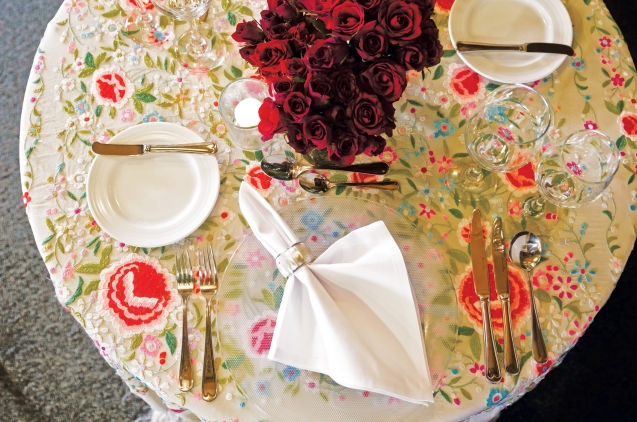 Table for One: Barretto has been a pioneer in creative table settings

Via Mare boasts a long-standing reputation of being the choice concessionaire for relevant national events. “We began by catering to prolific guests staying at the Malacañan Palace,” Baretto recounts. “I remember English ballerina Dame Margot Fonteyn and American pianist Van Cliburn, among others.” Her reputation as a growing authority in the food industry reached the ears of then First Lady Imelda Marcos, who was insistent that Via Mare handle the catering for the state dinner of former United States of America president Gerald Ford. Barretto’s reputation in the business flourished. She catered the silver wedding anniversary of the Marcoses, and almost all the events in the Palace during the Marcos administration. She continued doing the same during the terms of Presidents Fidel Ramos and Joseph Estrada.

Eventually growing weary of the rigorous demands of maintaining a fine-dining restaurant, Barretto shifted gears to revamp Via Mare as a café, oyster bar, and a catering service. “It’s tough having to stay in the kitchen now that I am older. When you run a fine dining restaurant, you have to stay in the kitchen and supervise. I felt it was time to relax a bit.” Via Mare’s food is prepared in the commissary, and is delivered to the different branches on a daily basis. This procedure ensures that the consistency and quality of the dishes remain uncompromised. Though she has stepped back from the goings-on in the kitchen, Barretto refuses to play the role of a sitting duck. “We need to keep on improving,” she insists. “Food is so dynamic now, and we need to keep up with the changes in the industry.” 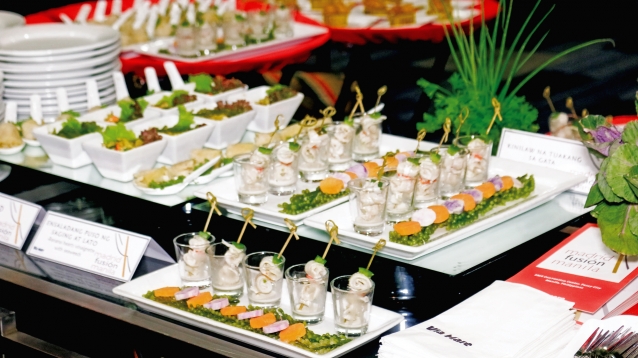 For Barretto, the future of the Filipino food industry is a bright one. She has seen so many young chefs following in her footsteps in pursuit of that Filipino culinary dream. “Maintaining a Filipino restaurant can be difficult nowadays,” she admits. “But the young ones are opening their own ventures, and that makes me very happy because it shows that we are going somewhere.” What is most important to her, though, is that young chefs who strive for success remain focused on their craft.

With numerous competitors out in the field, it is worth noting that Via Mare remains secure in its position as the authority in Filipino food. Barretto chalks this up to the fact that their speciality is and always will be comfort Filipino food. “Our food is the kind of food that people sincerely crave for. Everyone who eats at Via Mare tends to have a favourite. Our adherence to the correct process of cooking also ensures our staying power. We will always be committed to serving only the best.”

Published on Philippine Tatler September 2015 issue, available in any leading newsstands and bookstores. Download it on your digital device via Magzter, Zinio, and PressReader.