The Bordeaux Rendezvous in Manila

By Aussy A. Aportadera March 28, 2016
For the first time, Manila experienced the prestigious Bordeaux Rendezvous with 18 classified growths contributing to an extensive wine list at the jamoneria, Txanton. The annual wine tasting event, Bordeaux Rendezvous, made Manila its last stop for 2016.

The esteemed wine event, Bordeaux Rendezvous, has journeyed across Southeast Asia to introduce select wineries and their ambassadors to the region for the past few of years. In 2016, it traveled through Jakarta, Bangkok, Singapore, and Saigon. On February 29, it made an unprecedented stop in Manila. Txanton takes its name from Txanton Aboitiz, one of the oldest Spanish families in the Philippines.

It was the afternoon of the Leap Year Day and there was a fortuitous air at Txanton, the country’s first jamoneria and venue for an intimate afternoon with the winemakers, estate owners, and wine ambassadors of Bordeaux Rendezvous 2016. Walking into the bodega, guests were greeted with an overwhelming display of Jamon Iberico de Bellota. Bottles of Old World wines lined the walls that separated a common space and two private tasting rooms. La Sala de Cata (The Tasting Room) is a private hall that can accommodate up to 12 people.

Through the efforts of the French wine merchant Barriere Freres and the wine importer AWC Philippines, Bordeaux Rendezvous 2016 introduced vintages that had never before left their estates. Later that night, magnum bottles would be opened for dinner at Sofitel Manila. 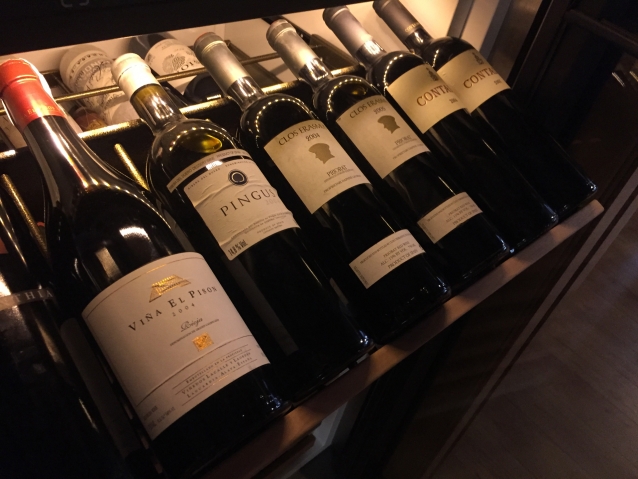 Txanton’s own cellars house some of Spain’s finest bottles of wine.

The extensive list of wines exhibited a curated taste of the French wine capital. Each of the appellations showcased a range of both young and ripe wines from their estates, exhibiting the complexity and maturity of the respective vintages. Bordeaux Rendezvous brought some of the wineries’ owners themselves. From further downstream, Pessac-Leognan’s Chateau Malartic-Lagraviere (2008) also provided a fresh white wine (2010) alongside a memorable 2010 vintage from Domaine de Chevalier. Sauternes’ Chateau Guiraud 2002 expressed considerable length in the mouth, displaying a particular finesse that was masked in the 2014’s honey flavours, though promised in the 2012. Chateau Dassault stood for the Right Bank, articulating a decade in Saint-Emilion with vintages from 2000 and 2010.