In Conversation With Agnes Arellano

By Dorynna Untivero July 28, 2017
Ever wonder what a typical day in the life of a sculptor is like? We talk to Agnes Arellano about several topics including Tai Chi, Peace Cranes, Myths, and her time as a Fine Arts student 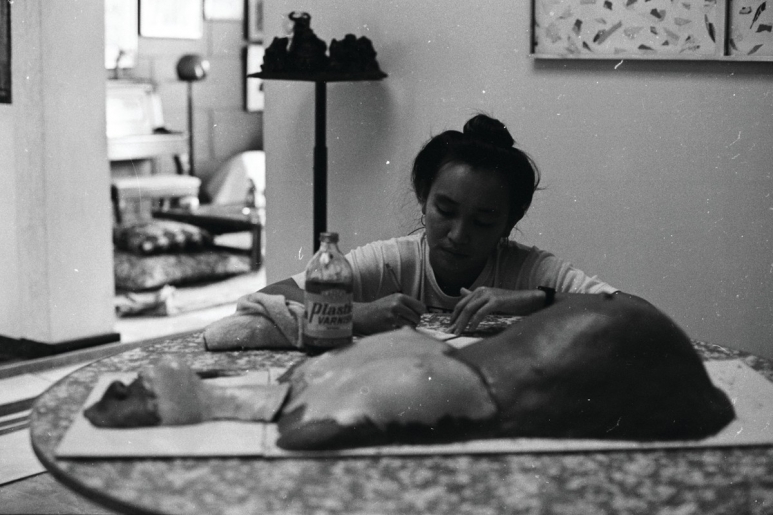 During the making of Temple to the Moon Goddess (1983) - Agnes Arellano | Photo: Courtesy of agnesarellano.com

She continues to make her mark in the world of Philippine Art with her collection at the recently concluded Art Fair PH – Project Pleiades – an exhibit of four versions of a mythical Goddess, all moulded from Arellano’s own body.

In this Philippine Tatler exclusive, we sit down with the lovely sculptor and talk about her hobbies, the intricacy of her collections, and how she became a sculptor.

What would be a typical day in the life of Agnes Arellano? Any hobbies?

I start the day early with Tai Chi at the village gym, an hour of warm-ups and twenty minutes of the 108 Yang-style form, with my partner Billy. Then I make breakfast, which is usually a bowl of mixed fruits, nuts and chia followed by boiled egg and toast. The quality of light during the day is very important for the sculptor –especially when modelling— so I try to limit my working hours to daytime. The pace of the day would depend on whether there's an exhibition coming soon, in which case it can be a bit frenetic; if an exhibit's just ended, then very laid back.

A day of work would either be spent at the studio where I do the modelling of life-sized pieces in plaster, or simply at home making clay models/maquettes, tea-staining small cast stone pieces, or patinating bronze bells. 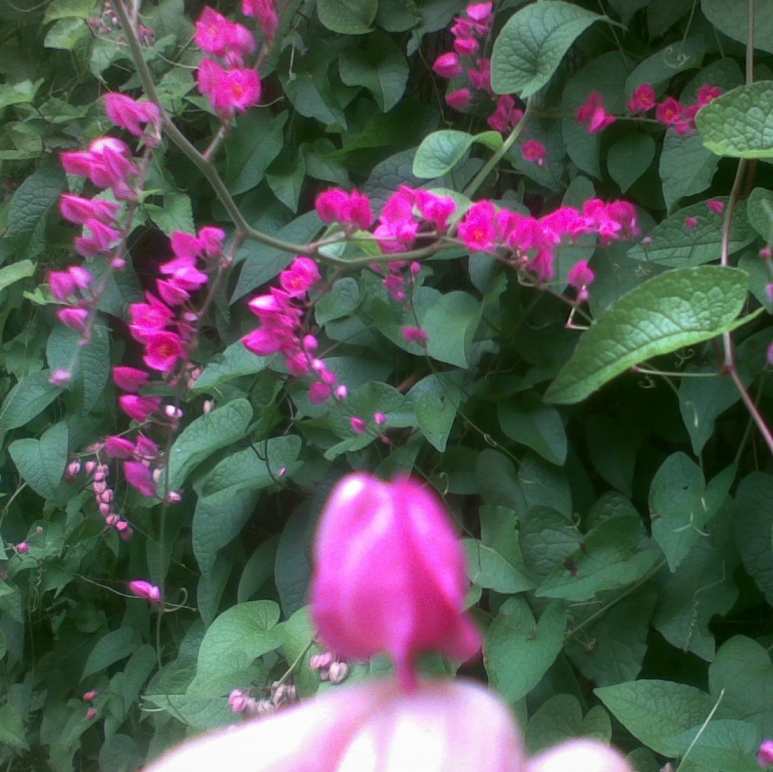 A nice way to end the day is to attend an exhibition opening, which Billy and I do quite often. Openings are good for one: we get to keep in touch with the newest in contemporary art and to exchange notes with other artists.

I need to be always doing something with my hands so I have a lot of crafty hobbies that I keep going back to, like making love pipes from clay, imprinting cadena de amor leaves on clay dishes, weaving phallic shaped pouches with a blunt needle, etc. 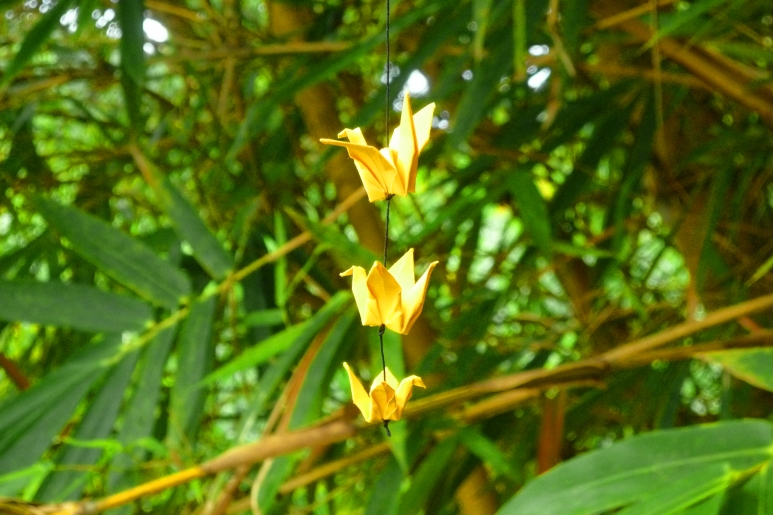 I notice that when I'm about to start a new piece I get a bit obsessive with some craft or other. At the moment it's Cranes for Peace. 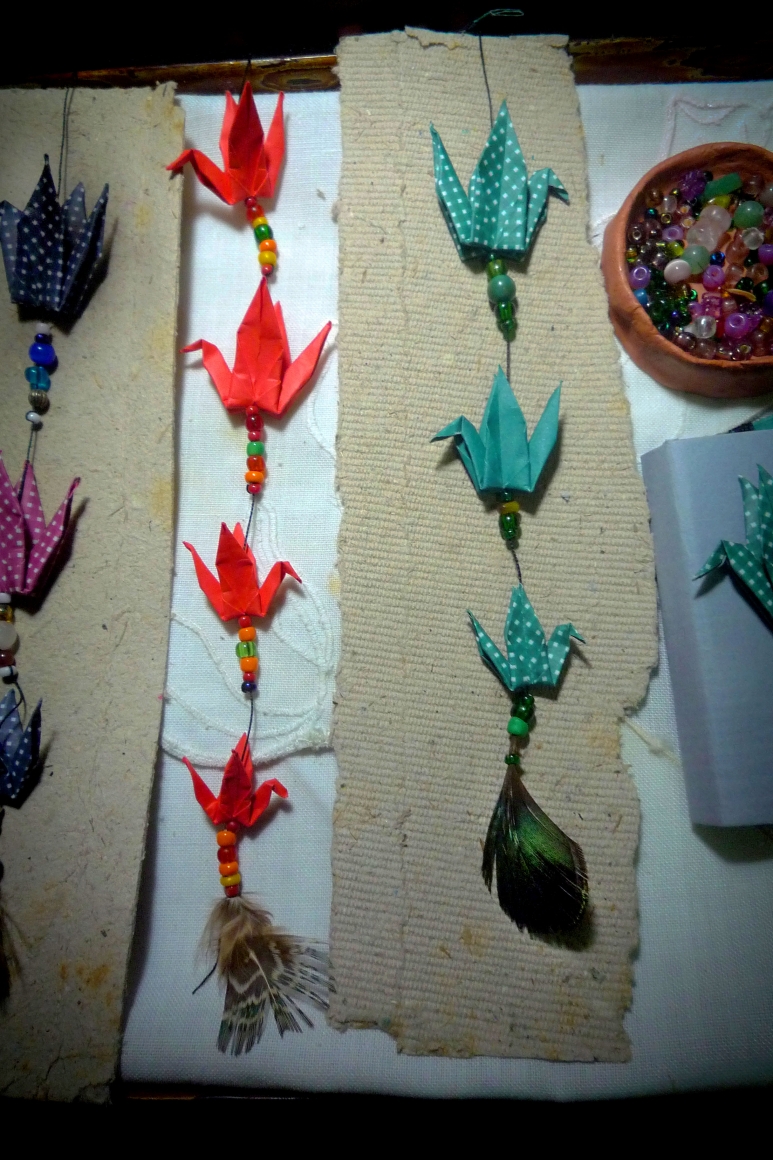 Paper cranes by Arellano ready to be gift-wrapped | Photo: Courtesy of Deo Arellano

I've been folding paper cranes for a few weeks now, keeping in mind the girl from Hiroshima [Sadako Sasaki] who never got to make her thousandth. I string them with beads and a feather or a sprig of palay as hanging ornaments and when I give them away as gifts, I insert a Tibetan prayer for peace.

In your website Biography this is stated “…I compare my research sources to a pail of dirty water. I stir up the sediment, and hypotheses emerge” – could  you tell us more about this?

From the very beginning, I have been working with casts of my own body. It is through and around this vehicle that ideas culled from research (and life) get distilled and expressed. 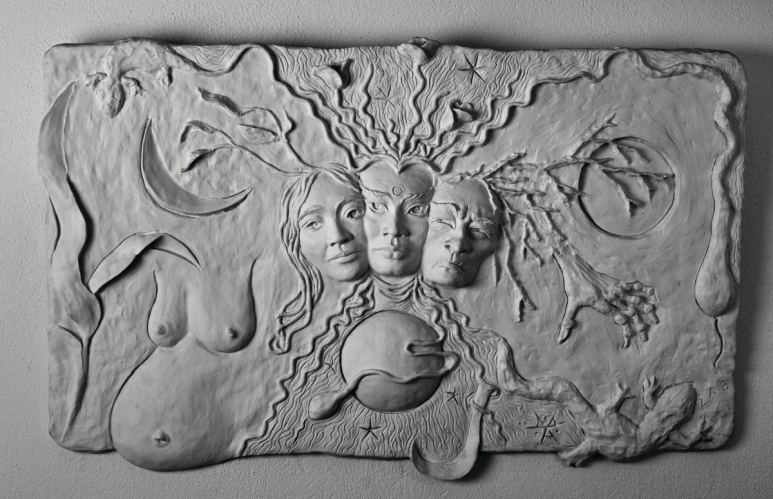 In 1983, I made my first inscape, "Temple to the Moon Goddess", a treatise on the female principle in religion. In reality I'd felt totally disillusioned and was looking for a more benevolent deity than the stern “god the father” that I grew up believing in.

Research into mother goddess worship yielded so much "sediment": Isis, Aphrodite, Demeter, Kali —so many names, so many manifestations! Temple to the Moon Goddess (1983) | Photo: Courtesy of agnesarellano.com

I then proceeded to list down elements, architectural constructs that I would like to find in a place of worship: arches, pillars, guardians... the Greeks had caryatids, the Egyptians had their sarcophagi. With these images came a lot of comparative mythology in the form of stories, which all got synthesized into a 24-piece collection. An Example of Caryatids at the Book Tower in Michigan | Photo: Courtesy of Wikicommons

Tell us about  the centerpiece in your Temple to the Moon Goddess collection, "Haliya Bathing". The central altar, "Haliya Bathing", a floor piece | Haliya is a moon goddess from Bicol myth, portrayed here with child from the earthman in the story.

She lies on a bed of crushed white marble with ripples raked around her to simulate water from the sacred stream. Her body was put together using casts of my own body parts- except for the swollen belly which I built up with modelling clay.

One evening I had a shock. I was setting up the prototype in our atrium at home when it/she suddenly was so eerily alive! I attributed that to my yet-unaccustomed confrontation with my own face and body... However, not long after, I was astonished to discover that my secret wish had been granted— I was pregnant! Like Haliya, I was to have a daughter.

Not less surprising, decades later when we visited Kuala Lumpur, we learned about Dayang Bunting, the moon goddess of Malaysia (counterpart of our Haliya from Bicol). Even the words were similar: bunting = buntis = pregnant. 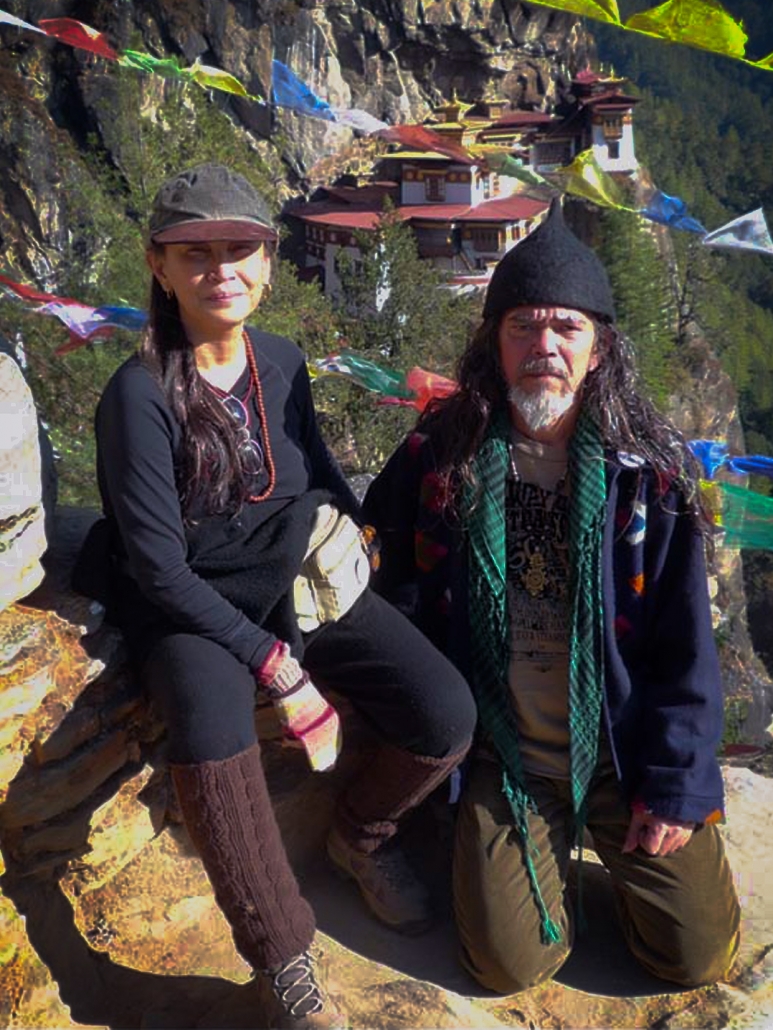 Agnes and Billy captured in one of their travels to Bhutan, 2008 | Photo: Courtesy of Deo Arellano

"She" was a lake in Langkawi where a woman would go to beseech the goddess to bestow her a child. A French couple that we know actually travelled to Langkawi to bathe there and ask for a child, a wish answered by again, a daughter.

What can you say about your “Flying Dakini” exhibit? 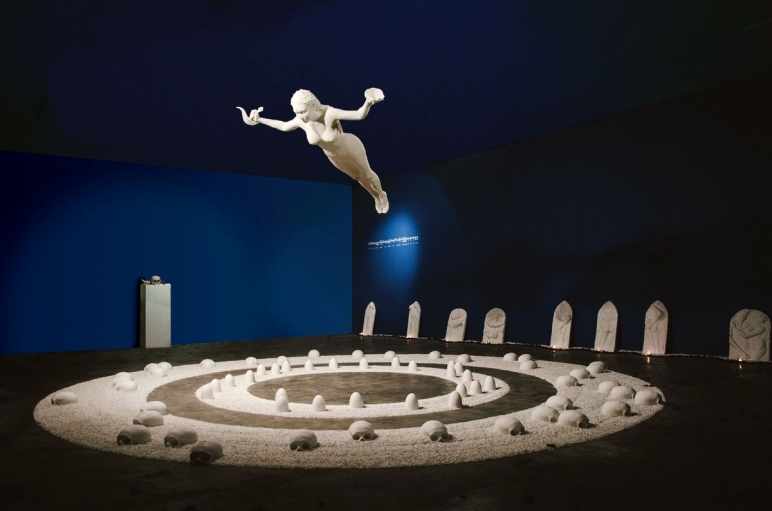 In retrospect, my earlier works had been autobiographical. In portraying mythical figures, the psychologist in me was processing my inner selves at significant points in life, tackling issues like the midlife crisis. By the time I did the Flying Dakini I felt I had been through most of life's major events and it was time for a shift. Flying Dakini is the female embodiment of enlightenment.

How about your most recent exhibition at the Art Fair PH 2017?

Project Pleiades is a work in progress. There is only one Goddess but She comes in many forms. They all start out from the same mold, and are portrayed with their arms in the gesture of epiphany. Behind each one is a yantra or cosmic diagram. 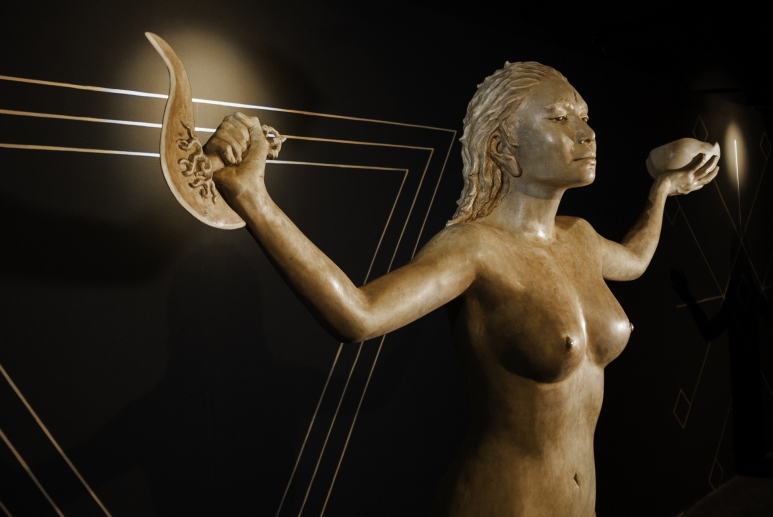 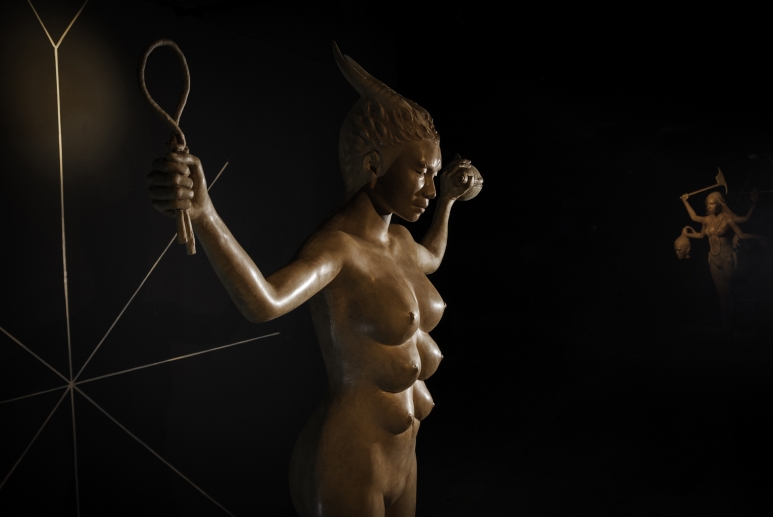 Apart from Dakini, the other three are: Inanna, multibreasted and tamaraw-horned; Kali, four-armed, fanged and wrathful, and Magdalene, whom I bestowed with the Christ's crucifixion wounds and for whom I shed many tears of vindication.

In your website you also talk about your works as ‘inscapes’ (as inspired by Hopkins – the unified form of complex characteristics) – can you tell us more about this? 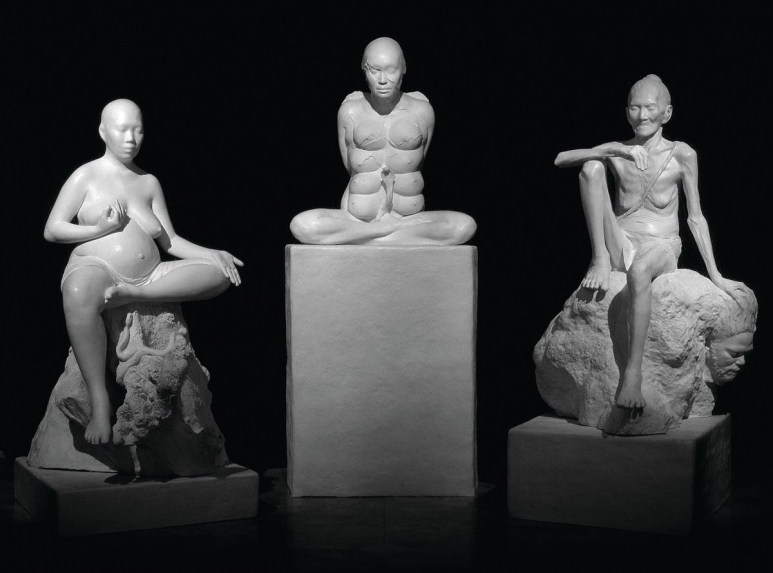 The sculptures I share with the world can acquire new and multiple meanings depending on the culture and background of the viewer but I try to focus on the archetypal, which all people subconsciously recognise from the depths of our collective unconscious.

When I showed the Three Buddha Mothers (now in the collection of the Singapore Art Museum) at the Asia Society's exhibition "Traditions/ Tensions" in New York, I had synthesized many diverse elements. 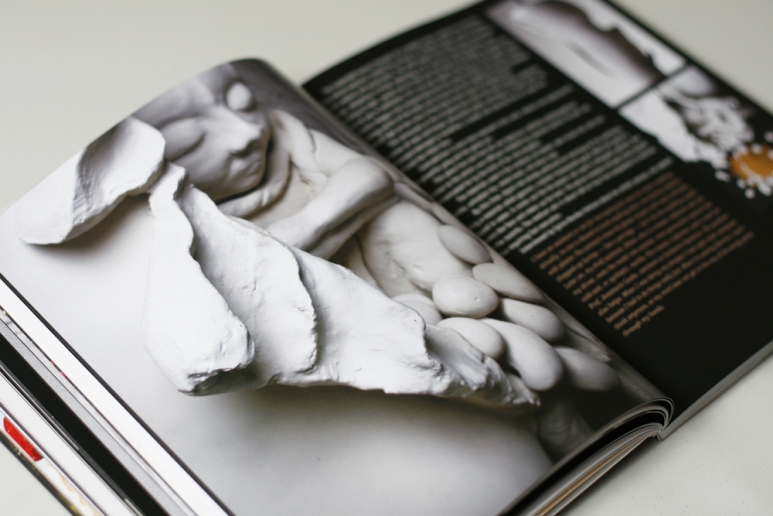 The juxtaposition of these diverse and disparate elements came with this unverbalised message: to see the sacred in the utter simplicity of the everyday. Another message, later gleaned, was that women could also attain “Buddhahood”.

Lastly, what would be your advice for anyone who is looking into sculpting as a career/ artistic path? A page from Arellano's notebook | Photo: Courtesy of agnesarellano.com

I was 29 when I went back to study in the college of Fine Arts in UP Diliman and by then had finished a master's that needed a thesis in psychology. My father realised how bored I was with my psychometrician job and offered to fund my schooling again, if I wanted to take another course. Coming from a family of architects who had their share of starving artists, he had discouraged us from following that path, but it was running in my veins and could no longer be denied.

It must have been a rarity at the time, for the famous Professor Anastacio Caedo incredulously challenged me by saying: "Baka pasawsaw-sawsaw ka lang!" (“perhaps, you’re just playing around”).

Indeed one has to be resolute, for it's no easy path. "Sunburst"  by Napoleon Abueva, a classic piece at the historical Manila Peninsula | Photo: Courtesy of manila.peninsula.com

National Artist Napoleon "Billy" Abueva was Dean at the time, and sculpture was encouraged, if not inspired. He would say that to be a sculptor, one needed to wear so many hats: that of model-maker, mold-maker, welder, carver, mason, architect, engineer, etc. At the same time, another teacher was saying "You can also hire a muscle". One would need a balance of the two. "The Lobby" at the Manila Peninsula featuring "Sunburst" by Napoleon Abueva | Photo: Courtesy of manila.peninsula.com

I do neoclassical sculpture and for this I would prescribe a strong knowledge of anatomy. Like one drawing teacher said, when drawing a leg for example, we must start, not at the exterior outline of the flesh, but inside it, with the bone structure.

There was a time I would teach anatomy by asking my students to put a whole skeleton together. I have three sets of bones that I keep in a treasure chest, periodically dusted and preserved with acrylic emulsion.

To know more about Agnes Arellano and her works, you may visit: agnesarellano.com.