He has designed some of the most iconic buildings in the world, but Carlos Ott only aims to create beautiful, functional buildings, not landmarks

Though it was Carlos Ott who conceptualised the famous Burj Al Arab in Dubai, the iconic sail-shaped hotel isn’t officially one of the Uruguayan architect’s buildings. Should you look up the building on the Internet, the initial results won’t even show Ott’s name. Why? It only took the tiniest of blunders to cause what the architect now calls one of the “most horrible experiences” he has ever had in his career.

In the late ’80s, Ott was contacted by the ruling sheikh of UAE’s right-hand man to create conceptual sketches for an iconic building. After submitting some rough pencil drawings to the client, the architect soon found out that his contact had been fired, thus bringing the project to a standstill. Three years later, however, he was shocked to find out that construction for his building had commenced, and was being handled by another firm, at that. Ott only had himself to blame—he had neglected to sign his sketches. “My building was identical to Burj Al Arab, but a bit taller. The main concepts—building on the water, a sail motif, a restaurant with an aquarium—were my ideas,” he told the Middle Eastern publication Al Manakh in 2006. “The experience spoilt my relationship with myself, not with Dubai. When I drive by and look at the building, I say, ‘Oh, what an idiot I was.’”

Even without the credit for having designed the Burj Al Arab, Ott is one of architecture’s biggest living legends. He is the man behind some of the most iconic buildings around the globe: the Opéra de la Bastille in Paris; the Torre Antel in Montevido, Uruguay; the National Bank of Dubai; and the Hangzhou Grand Theatre in China. Recently, he has been seen shuttling in and out of Manila as he works on his first project in the Philippines: The Proscenium at Rockwell, a premiere mixed-use development that will consist of five residential towers, a Retail Centre, and a world-class Performing Arts Theatre. 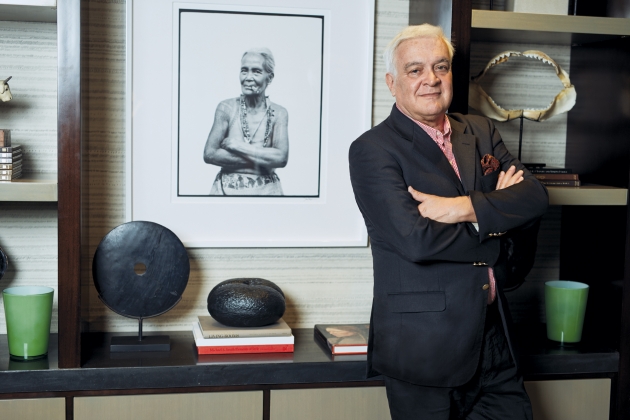 At this moment, the construction for one of the residential towers is well underway. The Lorraine Tower will stand at 45 floors, offering only a limited number of two to six units to a floor and unparalleled access to the esteemed Rockwell Center. With its sophistication and elegance, the Lorraine will be the city’s first taste of The Proscenium’s grandeur.

As they develop plans for The Proscenium, Ott and his team are making efforts to incorporate as many locally sourced materials as possible, in adherence to the sustainable design philosophy. Though the movement for green design has been gaining traction in recent years, this is by no means a new approach for Ott. His father was an architect himself, and Ott grew up visiting construction sites and watching his dad work at his drafting table, knowing as early as then that he would be following in his father’s footsteps. Ott would eventually begin his career in 1971 in his native Uruguay, where the country’s lack of resources and harsh weather conditions compelled architects like him and his father to design green buildings that worked with the elements.

“Back then in my little country, electricity, gas, and petroleum were very expensive,” he explains. “And unlike the Philippines, we’d go from summers of 30°c to winters of sub-zero temperatures. We could not install expensive air conditioners to cool our houses so we had to make buildings that were logical, with walls thick enough to keep the building warm in winter and cool in summer. We would avoid using expensive materials because we had to work with what we have. I think wealth has the tendency to make you silly and wasteful.”

When speaking of this philosophy, Ott cites Pope Francis’ second encyclical Laudato Si, which stresses the position that taking care of nature is humanity’s responsibility. “Humanity has only one planet— this one,” Ott explains. “We are attacking it constantly, creating a tremendously negative impact on the environment. The Pope says this is not right. As Catholics, everyone should act to preserve our clean water, air, and wildlife. This is a social and cultural approach because it’s very easy to make a green building if you are rich. But the poor have the same right as the rich to have clean air and water.” At the time of our interview, Ott and his team are working on the plans for the development’s Performing Arts Theatre. The Proscenium is anticipated to bring to the Philippines world-class talents the likes of which the country has never seen before—acts that require the most optimal of conditions before they would even consider performing at any venue.

The Proscenium is a ground-breaking project that will only set the bar higher in the rapidly developing city. However, though he is known for innovative buildings and developments, creating landmarks has never been Ott’s primary goal. When undertaking a new project, the architect’s aim is simply to design a beautiful building that works in harmony with its environment.

Does he think that The Proscenium will become a Philippine landmark? “I cannot say,” he says with a shrug. “Only future generations can tell. A painter cannot judge his own paintings, a writer cannot judge his own book. The role of the artist is to do his work, and let the public interpret it. So who am I to say if the building will be iconic? I’ll just do the most beautiful building that I can.”