By Cristina Morales May 09, 2017
The industrial designer Michael Sieger’s home in Germany presents a striking yet harmonious contrast of the old and new Vividly hued pieces fill the living room: a red stool from the Masterpieces collection by Michael’s father, Dieter Sieger, an artwork by Roger Selden, and a hand-me-down sofa inherited from Michael’s parents

On a quiet street in the heart of the laid-back city of MuÌˆnster, Germany, sits a handsome three-storey brick house from the GruÌˆnderzeit period. For eight years and counting, this impressive 100-year-old structure has been the home of the designer Michael Sieger and his family. Michael Sieger in the hall holding a handcrafted porcelain vase called The Body (Objects to a Muse collection) from Sieger by FuÌˆrstenberg | Image: Courtesy of Sieger Design

The Sieger family lives what Michael describes as a “quite placid and tranquil life” in the Westphalian city known for its greenery, universities (around a fifth of its 310,000 residents are students), and so many bikes that it claims to be the “bicycle capital” of Germany. “MuÌˆnster is ideal for families with children,” Michael says. “My daughters go to school by bike through the inner city.”

The Man Behind the Brand Michael is the creative head of Sieger Design Agency, which his father, the architect Dieter Sieger, founded in the 1960s. He grew up going to design shows with his parents and spending weekends at homes his father had designed. But it wasn’t until he began his studies in industrial design that he really discovered his passion for his craft. They were still in school when Michael and his brother Christian started working on design projects together, many of which went on to win prestigious awards. 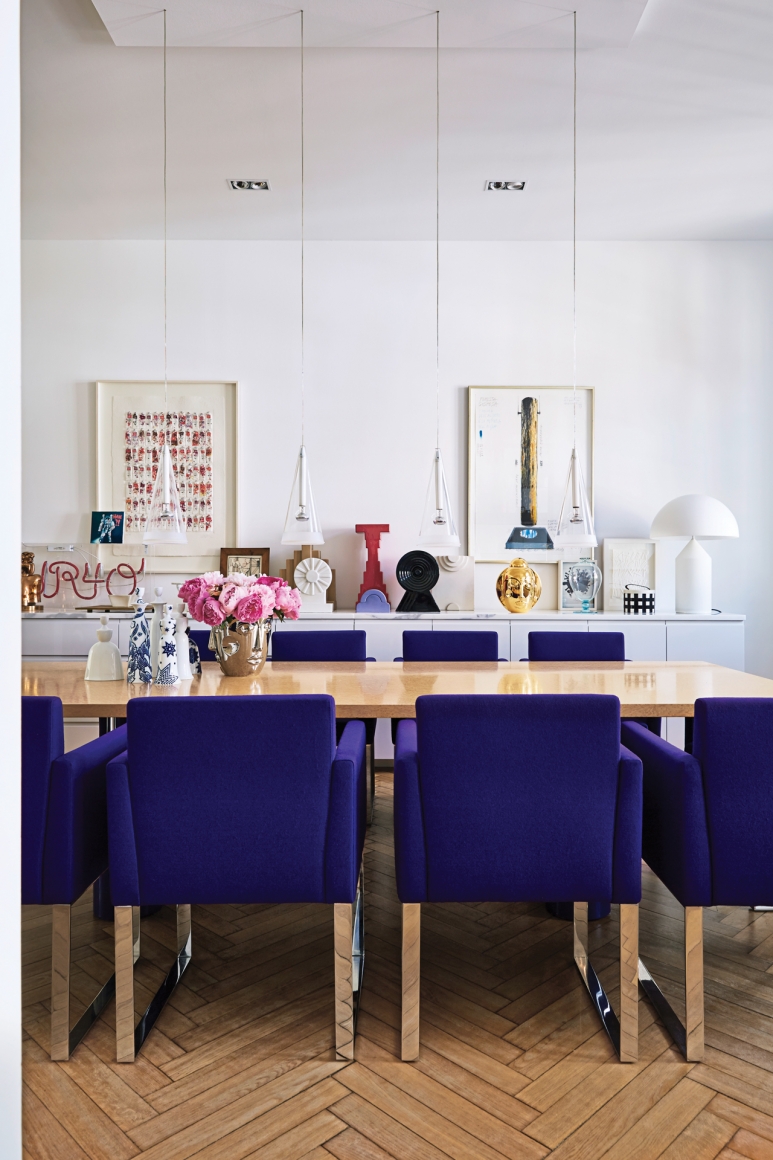 Chaise Couture chairs in purple designed my Michael himself

In 1983, Michael came upon the designs of Ettore Sottsass at a furniture show in Milan. The colour and playfulness of the Italian designer’s body of work made such an impression on him that Michael’s creations continue to be influenced by Sottsass to this day.

Now a multi-awarded industrial designer, Michael has successfully led the family business with his brother for 14 years. Under the leadership of the second generation, Sieger Design now partners with over 50 reputable brands, including the premium bathroom and fittings maker Dornbracht. In 2005, the brothers launched Sieger, a fashion and home accessories brand that, like the family’s design firm, is characterised by colour and functionality.

Michael and his family were living in an outbuilding of Harkotten Castle (the headquarters of Sieger Design) when one of the designer’s friends saw the listing for the house in the newspaper and told him about it. The 300-square-metre house’s high ceilings appealed to Michael, as well as its central location. “Alongside the rooms’ height, the general good structure and the location in the city were decisive,” Michael explains. At the entrance hall is a unique mirror from Ettore Sottsass

The rich history of the old house also drew Michael in, even though it was a bit of a fixerupper when he first saw it. In terrible need of restoration, the house had definitely seen better days. Among its previous tenants was a students’ fraternity, who had made the house their headquarters for 40 years. Literally battlescarred, its roof beams are still marked with sword cuts, as the fraternity had once used the attic for fencing.

“The house was in a desolate state and in need of a total redevelopment,” recounts Michael. But there was a silver lining to this: the house’s rundown state meant he could do almost whatever he wanted to restore it to its former glory. “It gave us the chance to completely style it in a new way.” Luna, the family pet, lounges on a Diamond chair by Harry Bertoia by the purple staircase

First, they relocated the kitchen from its place near the entrance and designed it so that it faced the sun and opened up to the dining room. They then put the space in the attic to good use by converting it to Michael and his wife Bettina’s private rooms. And because their children needed more natural light, their rooms were placed on the second floor.

Because colour plays a central role in his work, Sieger chooses to surround himself with a variety of it in his private life as well. The white and light wood of the interiors are set off with playful pops of colour—violet, turquoise, fuchsia, orange, and more—all over his home. Most notable is the staircase carpet—a bright and dazzling purple.

The designer views each house his family live in as a “shell” for all the furniture, design, and objets d’art he and his wife have collected over the years. Yet, despite the many art and design pieces that make up the house’s furnishings, the Sieger home does not feel like a museum or exhibition hall. Every piece feels like it belongs organically to the home, and there’s a reason for that. Frames, a hand-woven rug from Sieger by Kupferoth, also designed by Michael Sieger infuses colour to the minimalist bathroom

“Each object tells its own, unique story: when, where, and how it was bought or auctioned,” he says. “My wife and I have acquired many of these things together. We select anything we like and do not valuate the objects and paintings as an investment of capital.” Michael and Bettina prefer to pick objects from artists or designers whom they know personally—particularly those with whom they have a certain relationship.

The sofa in the living room used to belong to Sieger’s parents, and he is particularly attached to the objects that he bought or received as presents when he was a teenager—for example, his first design furniture piece the I Feltri armchair by Gaetano Pesce, which until very recently could be found in the room of his eldest daughter. (Clockwise from top left) A Barcelona chair by Ludwig Mies van der Rohe for Knoll International in the couple’s open space sleeping area; in the dressing room, a red Diamond chair by Harry Bertoia stands beside a shelf that houses Michael’s personal tie selections; the bathroom features different fittings from Dornbracht’s MEM and Tara Logic series; an old “hat cupboard” out of the shop from Michael’s father-in-law

Of course, found around the home are pieces that Michael designed himself. The dining chairs are his own design, borne out of the dissatisfaction with the lack of options in the market and the desire to create a chair as comfortable as an armchair. (These chairs, called Chaise Couture, eventually became part of the Sieger brand’s portfolio.) Michael’s bathroom fitting designs for Dornbracht—the multi-award-winning MEM collection and its distinct lines, the modular Symetrics system, and the wall-mounted IAM basin mixer from the Elemental Spa collection—are also found in all the house’s bathrooms and in their kitchen.

“The dining table is the centre where everything happens,” he says. “The room is open to the kitchen and truly the hub of life.” It is here that the family start their day by having breakfast together in the morning. In the evenings, they all try to have dinner together as well; oftentimes, Michael and Bettina would linger at the dining table afterwards to work on their laptops. The home Michael has created is a stylish, eclectic, and colourful place that feels cosy and comfortable. None of it appears contrived or calculated; here, the various belongings that his family have collected over the years seem like they have naturally settled in their rightful places. 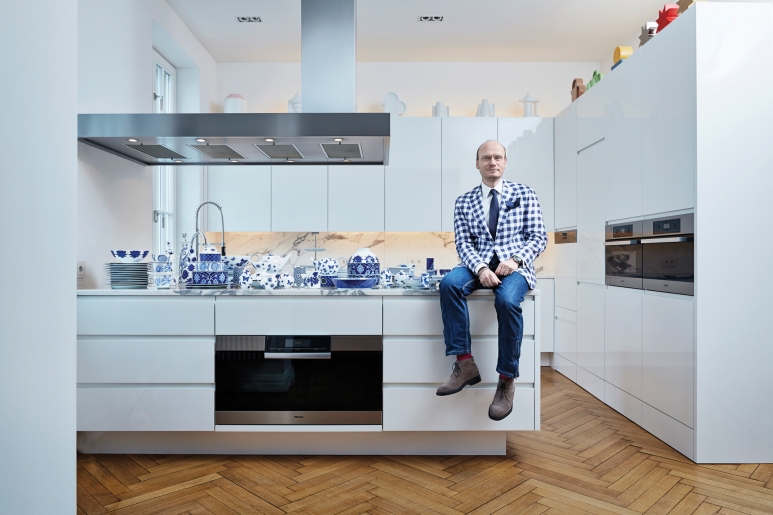 Michael Sieger in the kitchen. On the workplace are the My China collection (a handcrafted porcelain dinner service from Sieger by FuÌˆrstenberg) and Tara Ultra fitting from Dornbracht

“I’m not one for furnishing and arranging overnight,” says Michael. “In my opinion, the interior of a house must be developed over time. It should grow and change. A house must be alive.”