By Chit Lijauco August 04, 2017
On the second year of its return to the Venice Art Biennale, the Philippine Pavilion moves to the main platform Arsenale, an important location to present, via the Spectre of Comparison exhibition, the complex subject of national identity With amusement, Senator Loren Legarda remembers her act of boldness at the press conference for the 2015 Venice Art Biennale, which saw the return of the Philippine participation after a long absence of 51 years. “I don’t know how I mustered the courage but I accosted Paolo [Baratta] and invited him to visit the Philippine Pavilion at the Palazzo Mora,” she says. “And with braggadocio I also declared, to the president of La Biennale di Venezia no less, that two years from now, in the next art biennale, the Philippines will be presenting in the Arsenale itself! He must have wondered who this brazen woman was!”

Apart from some national pavilions and the collateral exhibitions and events held all over this beautiful city, the main exhibitions of the Venice Biennale are in two venues: the Arsenale, the largest pre-industrial production centre of the world, a symbol of the military, economic, and political power Venice enjoyed then; and the Giardini, a French garden built when Napoleon invaded the Republic of Venice in 1797. True to her declaration (though Legarda must have harboured some doubts at the time of its utterance), the Philippine Pavilion for the 2017 Venice Art Biennale has moved from Palazzo Mora to the Arsenale, in a beautiful space called the Artiglierie.

Admittedly, Legarda says, it was not easy. It first entailed a written letter to Baratta by the National Commission on Culture and the Arts (NCCA), then a lot of communication between the Philippine Arts in Venice Biennale (PAVB)—the committee that facilitates the coordination among the government agencies involved like the Department of Foreign Affairs, the Office of Senator Loren Legarda, and the NCCA.

All the efforts were well worth it. Finally, on 16 February 2016, a letter accepting the Philippines’ request to be invited to the Arsenale was received by the NCCA.

From this successful exercise the senator drew an important lesson. “Dream. Dream small or dream big, whatever. Just dream because you’ll never know, one day you will get it,” she states another declaration, this time with a confidence that accompanies the truth. The Spectre of Comparison, the title of the Philippine Pavilion at the 2017 Venice Art Biennale, is taken from a phrase that glides through time with a fluidity that defies barriers. It was first uttered in the late 18th century by Crisostomo Ibarra, the protagonist in Jose Rizal’s Noli Me Tangere, after the awareness of a moment when East and West converged; recognised a century hence by the American political sociologist Benedict Anderson after he found himself in a similar moment where, this time, past and present collided, and was inspired enough to write a book borrowing the Rizalian phrase for its title; then picked up another century later by curator Joselina Cruz to theme this major exhibition on a global stage where, she says, “the idea of representation—national representation—lies heavy.”

Ibarra’s moment happened on a visit to the newly-built Botanical Garden of Manila. While there, el demonio de las comparaciones, the demon of comparisons, took him to the Botanical Gardens of Europe where, in the translation by Charles Derbyshire, “great labour and much money are needed to make a single leaf grow or one flower to open its calyx.” Ibarra contrasts this with the gardens of the colonies, which are “well supplied and tended and all open to the public.” He also saw how a coloniser tries to bend and shape its colonies according to what it likes and, the translation continued, “Ibarra turned away his gaze toward the old Manila surrounded still by its walls and moats like a sickly girl wrapped in the garments of her grandmother’s better day.” Anderson’s moment, on the other hand, occurred in 1963 in Jakarta. Working as a translator to an American diplomat during the regime of Sukarno, Anderson remembered an instance when he was translating the words of Indonesia’s first president to his employer. In his discourse, Sukarno touched on the person of Hitler and spoke of history’s paradigm of evil in such a glowing, admiring tone. “It was going to be difficult from now on to think of ‘my’ Hitler in the old way,” Anderson wrote in his book The Spectre of Comparison, written after he read the Noli and likened his Jakarta experience to that of Ibarra’s in the Manila Garden.

“They both had the ability to look at the same things at once and be critical about what they saw—be it political, artistic, social,” says Cruz. She further explains that Anderson referred not just to a point of comparison or a commonality of experience but rather, a site of criticality, where one’s presence both here and there finds critique, if not contextual interpretation. It is in such context, when the Filipino can see himself amongst other cultures as well as through time, and is able to be critical about his state of being that Cruz believes national identity can be found.

With this peg, she developed her curatorial statement which bested a dozen other proposals for the Philippines’ participation in this year’s Venice Art Biennale. To articulate this statement, Cruz took the works of two artists, Lani Maestro and Manuel Ocampo, who, to her, “occupy this site of criticality.”

Maestro and Ocampo are both citizens of the world, having lived and created their art in many countries apart from their homeland. “Currently, Lani is based in Normandy and Manuel in Spain. For me this was important because they live in different contexts and they go back and forth the country,” explains Cruz. Marian Pastor Roces, in the exhibition catalogue, echoed Cruz’s observation when she described the artists as “natives and foreigners at once…alienated and at home, or always-temporarily at home in a Philippines experienced as the alienated space of travel.” 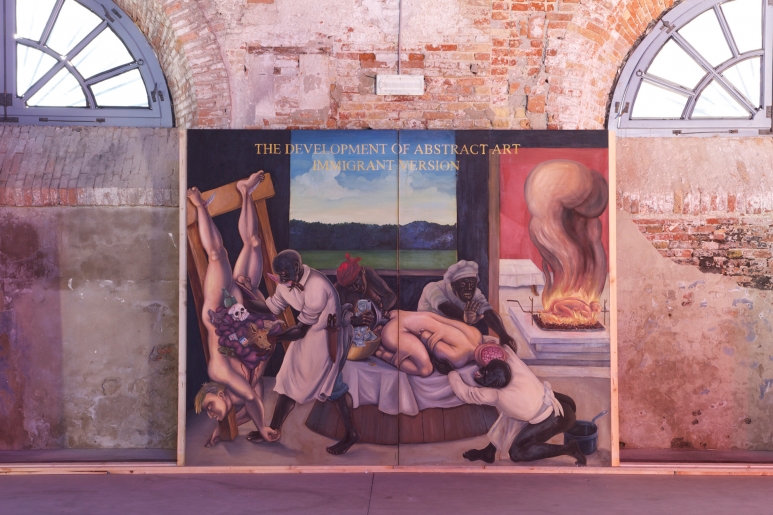 Cooks in the Kitchen by Manuel Ocampo

The two, according to Roces, find their nation in their art. She explains, “Art seems to be the containment of nation for them: responding to the Philippines from a distance…” Ocampo validated Roces’ reference to art’s role to the artist: “It refers to Hugo Chavez promoting football…to support sports is to make your homeland proud. So in my paintings, I deal with a lot of things, the notion of homeland, identity, and I also make fun of it.”

The difference lies in their definitive styles of work. Where Maestro is a minimalist, Ocampo is baroque, which elicited not a few disbelievers in how Cruz can put the works of these two artists together. “I trusted the artists, I trusted their work, I trusted their practice,” Cruz merely says.

The Artiglierie is not just a beautiful space; it is ideally located for viewing, being at a corner with a door that leads to another area. In the same breath, it also posed a major problem for Cruz. “I thought we could nail on the walls but apparently we were not allowed, so how can I hang paintings and wallworks?” Cruz describes her predicament. She relates that many nations just cover the walls so they can hang whatever wherever. But Cruz says she not only saw the beauty in the centuriesold

walls but its political context as well, particularly in the present with the wall the American President Donald Trump is erecting to divide the US and Mexico. Cruz could have exercised her curatorial prerogative in addressing this situation but she elected to work with her two artists. “We’d make proposals and many times they’d disagree with me,” she says. At the press conference in Venice last May, Ocampo said the same thing, “What we wanted was to keep the integrity of the space intact… it’s really a difficult space but we decided against putting up false walls and we went from there.”

When the Philippine Pavilion held its vernissage on 11 May 2017, the power of the works was not lost on the viewers.

In the middle of the space are 14 benches of reclaimed wood which Maestro put together at the Arsenale. The artist says that the benches of the installation, titled meronmeron, are for everybody to view as well as to sit down on while pondering over the entirety of the pavilion. Her remark: “We’re proud to be here but at the same time, because we’ve moved around and become part of other context[s] that claimed us, it’s nice to be claimed by many people. It’s like sitting in these benches, lahat kasali [everyone is included]. In the end, countries, nations, they’re just categories.”

Apart from meronmeron, Maestro exhibits a pair of neon-lit phrases titled No Pain Like This Body. The signs come in Venetian red, a natural red that contains both warm red with cool red undertones, not quite as orange in undertone as red ochre. And another, in blue this time, If You Must Take My Life, Spare these Hands. Loren, in a pure piña fully-beaded overcoat by Len Cabili, is surrounded by the works of Manuel Ocampo and Lani Maestro

This Zen-like art is jarred by the baroque works of Ocampo. His canvases (Torta Imperiales, Twelfth Station, Crème de la Crème, Cooks in the Kitchen) do not just scream in vibrant colours, but in irreverent figures as well, like a cockroach in place of a crucified Christ.

Contrasting though the styles of Maestro and Ocampo may be, their works are nevertheless both thought-provoking. Remarks Cruz, “There is this tension between the two artists and it is this tension that creates this exhibition.”

This story appears in the August 2017 edition of Philippine Tatler. Grab a copy from any leading newsstand or bookstore or download it on your digital device via Magzter, Zinio, or Pressreader.