One of the most beautiful Philippine ambassador’s residences, a prime property in Tokyo, a home replete with history including a famous past resident—reasons enough for many to believe the government ought to keep it. Majestic Mansion: Nearing its centennial mark, the Yasuda Mansion retains its regal bearing, thanks to the care given by the Philippine government

“She giggled like a schoolgirl.” this was how Ambeth Ocampo described Yoko Ono in his new book Heritage and History of The Kudan: The Official Residence of The Philippine Ambassador in Japan as he recounted a visit that the renowned artist made to the diplomatic residence. Ocampo wrote: “In December 2012, Yoko Ono returned to her childhood home as a guest of current Philippine Ambassador Manuel M Lopez and his wife Maritess Lagdameo-Lopez. No stranger to the mansion, she had been received on previous visits by  former Philippine ambassadors … When asked about her memories of the Kudan, she asked Ambassador Lopez if it was all right for her to visit the watchtower … Yoko Ono stood up and exclaimed: ‘I know the way!’ as she led everyone through the narrow corridor leading to the kitchen and a backroom flight of stairs. She went up two flights and waited a while as the Kudan butler opened the door leading to the watchtower. Up the steep steps she pointed to the attic … as she made her way to the watchtower.”

Looking out of the watchtower, which offered a bird’s-eye view of the garden and the buildings outside the perimeter walls, Ono reminisced: “There were no buildings around the house. From here, one could see part of the Imperial Palace grounds and discern the buildings on Ginza and Nihonbashi.” This was her favourite room, as was stated in an interview with Maja Olivares, co-publisher of the book and creative director for the Kudan Project. It had a telescope, she said, from which you could see the whole of Tokyo because the house was on the Takadai (high place in the city). And she told her small private audience, “From here, on a clear day, we could see Mt Fuji.” 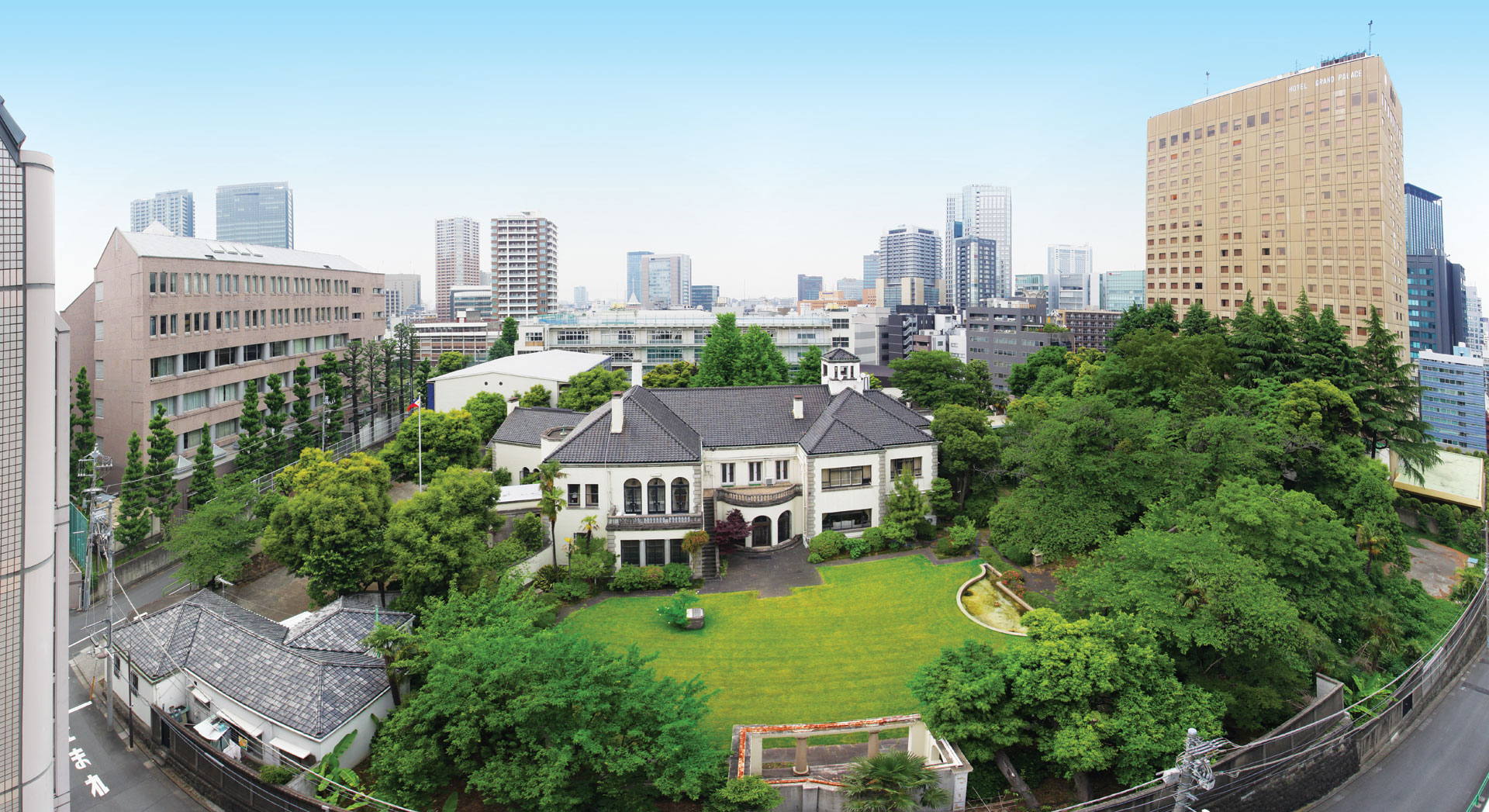 The Kudan House is prime property

On her way down to the second floor, Ono stopped at one of the small guest rooms by the carpeted winding stairway. “This was my bedroom,” she said, and shared a recollection: “Even during the blackout nights, my aunt, who was a rebel at heart, gave dance parties as the enemy planes were roaring in the sky. The servants put up black curtains in e very room and the devil-may-care aristocrats kept dancing till dawn. We children were told to go to bed early. But we made sure our nannies were nodding off, and sneaked out of our beds and sat at the t op of the stairs t o see the ladies in great evening dresses walk by. I remember my elder cousin telling us to be absolutely quiet.” Additionally, Ocampo wrote: “She then recalled observing parties on the ground floor from two hidden places: halfway down the formal staircase where she was concealed by the balusters, and another staircase that led to a narrow balcony overlooking the large baronial hall with a fireplace that had served as her uncle’s studio. Unseen in the mezzanine, she watched the elegant men and glittering women who were invited to parties at the Yasuda mansion.”

Man Behind the Mansion

Yasuda Iwajiro, an heir to a financial empire in Japan before World War II, owned and built the Kudan House, originally called Yasuda Mansion. He graduated with a painting degree from the Tokyo School of Fine Arts in 1928, then went to France to work as a professional painter. He eventually returned to Japan when he inherited the family home in Kamakura in 1930 but decided to build a new one in Tokyo soon after. He commissioned the Yokogawa Construction (who introduced steel-frame construction to Japan) and Takenaka Corporation to design and build the new residence. Construction started in March 1933 and was completed in January 1935. “My uncle invited one of the very best architects of that day from Europe to build this house,” said Ono. Records also point to the American-educated Tokisuke Yokogawa as the architect of the house, thus explaining the basically Western design. Comprising a basement, two storeys, and a watch tower, the Kudan was considered a top-class residential building with state-of-the-art technology and equipment during its time.

Yasuda had two siblings: a brother and a sister named Isoko, who married into the Ono family and had a daug hter she named Yoko. The girl who would grow up to marry the late great singer-composer John Lennon intermittently lived in the Kudan, mainly due to her father’s work in banking which took him to several major cities around the world like San Francisco, New York City, and Hanoi. 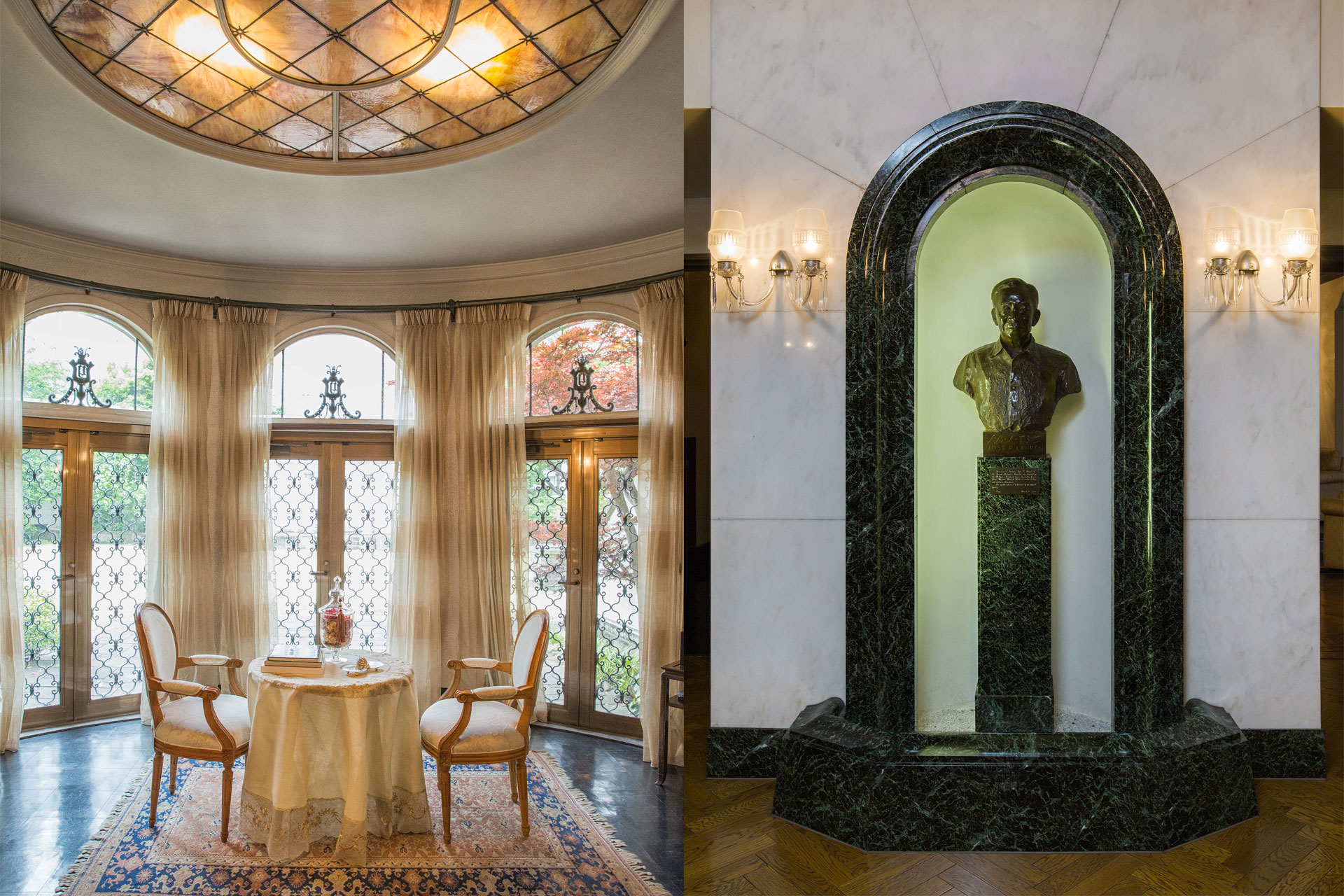 A cosy nook in the Rose Toom, and President Jose P Laurel's bust in the lobby

With the onset of World War II, however, Yasuda suffered a reversal of fortune; so in the spring of 1944, he sold the Tokyo property to the Philippine government through then-president Jose P Laurel, for one million yen. The story went that the Philippine government had insufficient funds, and President Laurel had to borrow money from his wife, Doña Paciencia Hidalgo Laurel. No records exist of Mrs Laurel having been refunded.

the entire property of 4,500-square metres located in the Tokugawa Shogunate is adjacent to the Imperial Palace grounds and the Yasukuni shrine in Tokyo. It is considered one of the few architecturally significant houses from the 1930s era that still remain, practically unscathed by war. Created in a curious mix of Renaissance, Gothic, Spanish, and Nippon styles, the Kudan is considered by many to be an architectural enigma. 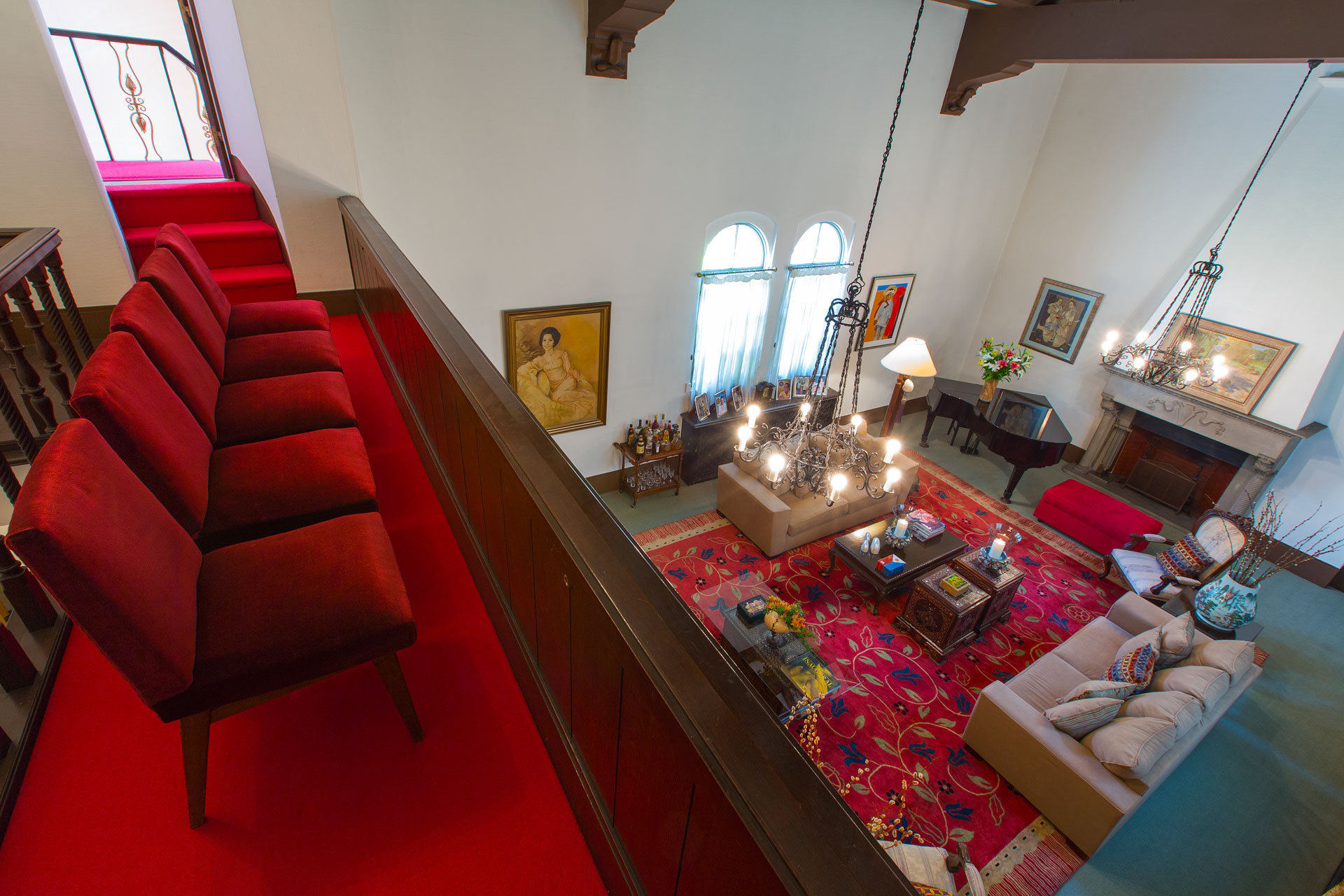 The Music Room from the balcony

“Filipinos refer to the residence as the Kudan to differentiate it from the Embassy or Chancery in Roppongi. Kudanshita, the closest Metro station to the ambassador’s residence, marks the foot of the famous Kudanzaka slope, also referred to as Kudan Hill,” said Minister Angie Escalona of the Philippine embassy in Japan. It is the first Philippine Embassy owned and established abroad, and arguably one of the most beautiful residences for Philippine ambassadors overseas. It was recently declared a National Historical Landmark property by the National Historical Commission of the Philippines, officially the first one outside the country.

Because of its value as a prime property, the Kudan House has been the subject of several attempts to sell, lease, or develop by joint venture. Making sure this does not happen are diplomatic and political leaders headed by the Philippine Ambassadors Foundation Inc (PAFI).

“By all means, the government should never sell Kudan and the other government-owned properties in Japan,” agreed Ambassador Lopez. “This residence is very special. Two years ago, it was proclaimed a National Historical Landmark by the National Historical Commission of the Philippines. No less than its Chairman, Dr Maria Serena Diokno, came over to do the honours with some members of the Ministry of Foreign Affairs of Japan and other VIPs. This is a very prestigious property with unique architectural design. You cannot find a property as big and in an exceptional location anymore in Tokyo.” 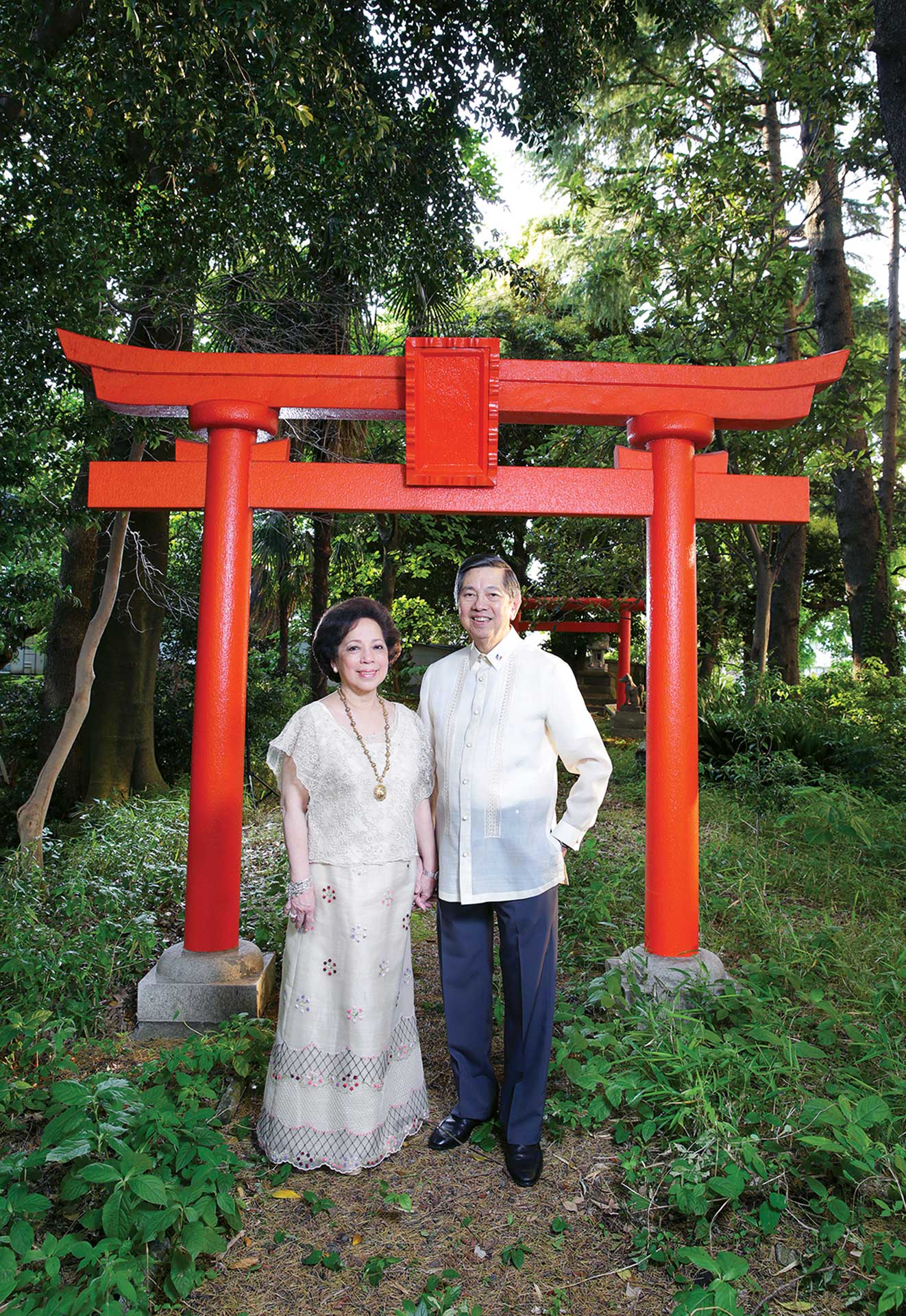 An 80-year-old house must cost a lot to maintain. Lopez, however, stressed that the government should allocate for this and all embassy residences abroad. “We just try to minimise the expenses as much as possible,” he added.

Lopez and those before him who were given the privilege to call Kudan House as their residence must have done something right. Its most famous past r esident is quite grateful. “The house now has been maintained so beautifully by the Philippine people expressing how destruction and ruin were not the only things that remained of wars. When you walk into Kudan House, you immediately feel the dignity, pride, and wisdom of the people of the Philippines to have decided to keep this house of cultural history,” commented Ono.

See all the photos on the November 2015 issue of the Philippine Tatler, now available in all leading book stores and newsstands nationwide. Download the digital copy from Zinio, Magzter, and PressReader.