By Marga Manlapig August 22, 2017
Celebrated Spanish-Filipino artist Fernando Zóbel returns to the Venice Biennale in a special exhibition after five decades; Marga Manlapig discovers how he is inspiring a new generation of art enthusiasts Three Serie Negra pieces— Guisando, Ornitoptero, and Icaro—are all on display together for the first time in decades

In 1962, at the 32nd Biennale di Venezia, an artist who would best be described as a man of many nations—Spanish by blood, born in the Philippines, educated in the United States—would make his mark in the Spanish Pavilion with art that enabled him to transcend his own trials and to convey a sense of peace and serenity. That man was Fernando Zóbel. Fernando Zobel poses in front of the Serie Negra piece Ornitoptero at the Museo de Arte Abstracto Espanol in Cuenca, Spain in 1966

At the time of his debut at the Biennale, Zóbel was at the peak of his mastery as a contemporary artist. His work was considered an exquisite meeting of Eastern and Western disciplines: the bold but graceful lines of Oriental calligraphy in sync with a stark palette which called to mind the bare simplicity and introspective aesthetic of the Cubists. This 2017, 55 years since that debut, Zóbel’s work again graces the halls of the Venice Biennale through an exhibition simply titled Zóbel: Contrapuntos.

In the spirit of the Biennale’s theme Viva Arte Viva, the Ayala Museum and the Ayala Foundation celebrate the work of the groundbreaking artist by presenting him to a new generation of art lovers. According to Mariles Gustilo, senior director for arts and culture at the Ayala Foundation, “This initiative is in keeping with Ayala Museum’s longstanding commitment to sustain interest and offer fresh perspectives in viewing and interpreting the artist’s works.” Curated by Ditas Samson, senior curator and head of museum research at the Ayala Museum, and Spanish artist Guillermo Paneque, the exhibition is one of the collateral events of the 57th Biennale and occupies the Fondaco Marcello along the Grand Canal. A total of 16 works produced by the artist between 1956 and 1963 are featured along with a select array of sculptures by his Spanish contemporary Pablo Serrano that are seen as an interesting visual and ideological contrast to the paintings on display.

Seen as an unprecedented compilation of Zóbel’s prime achievements, Contrapuntos serves as both an introduction to the artist’s work as well as a presentation of unique perspectives on his artistry and the visual language he expressed on canvas.

Man of the World

Art—both the creation of it and the history behind it—was something that Zóbel seemed to be linked to for most of his life.

His father, the industrialist Enrique Zóbel de Ayala, was known as a patron of the arts. He would give away scholarships to support a number of local painters a group that included National Artist Fernando Amorsolo.

Zóbel himself, however, would not come into his own as an artist until many years later; in truth, he actually set out to become a doctor, having started pre-medical studies at the University of Santo Tomas prior to the Second World War. But the war years brought about events changed his path: a painful spinal disorder that had plagued him since early childhood kept him bedridden throughout 1942; his father suddenly passed away from an infection a year later, unable to receive treatment because of the ongoing war. He would cope with the pain, grief, and loneliness by studying on his own and reading everything he could about art and art history. 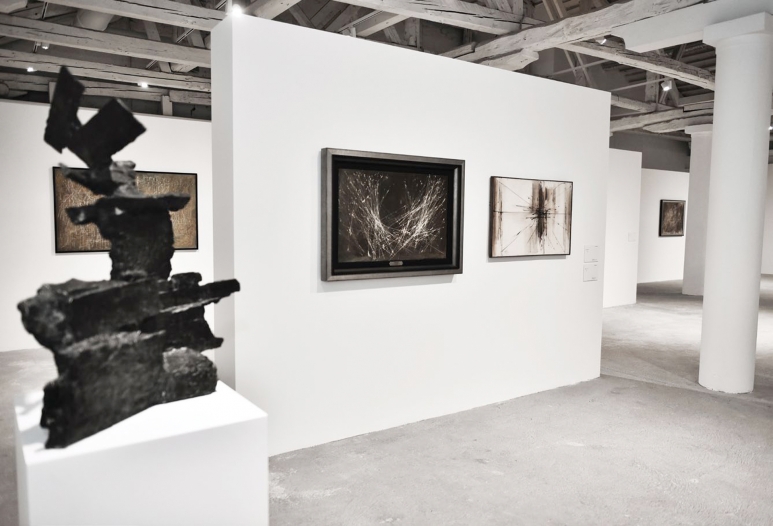 After the war, he made his way to Boston, Massachusetts where he enrolled at Harvard to study art, history, and literature; he would graduate magna cum laude in three years and be lauded for his thesis on the plays of Federico Garcia Lorca which, at the time, were actually banned in his native Spain. During this period of his life, he would find himself in the company of artists who would serve as his mentors as he sought his own identity. Some years later, he would be further inspired by the stark, bi-coloured pieces done by American abstract painter Mark Rothko.

Up until that point, Zóbel’s work leaned more towards the representational style and some examples of his work are said to have bordered on caricature. But his introduction to abstract art seemed to enable him to become more expressive with his work; it gave him the ability to express emotions and ideas without need for words, splashing them onto the surface and inviting the viewer to look, think, and speak. Bronze pieces by Pablo Serrano serve as a visual counterpoint

The exhibition focuses on the two different periods in the artist’s body of work that formed his signature abstract style. Painted between 1957 and 1959, the Saetas mark Zóbel’s transition fromrepresentational painting to full abstraction.

The collection’s name has two meanings in Spanish: an arrow or a form of flamenco-inspired liturgical music characterised by its way of sharply evoking emotions. In the case of Zóbel’s work, the word aptly describes the sharp angles and straight lines that slash across the canvas: images that were born not from a brush but from carefully aimed and applied splashes of paint delivered through a hypodermic syringe. It was a technique he had mastered after several experimentations in technique and material; it was, in essence, a throwback to the artist’s time as a pre-medical student in Manila. The Saetas were inspired by the artist’s exposure to the work of Rothko and his contemporary Jackson Pollock. But while Rothko’s work evokes a sense of immediacy and Pollock’s a studied chaos, Zóbel’s paintings have a way of calming the viewer. The stark, often austere palette and clean lines call to mind the bare simplicity of Japanese architecture and serve as a reminder of the artist’s longstanding affinity with Zen Buddhism.

The subsequent period, called Serie Negra, presents a more vigorous aspect of Zóbel. Painted between 1959 and 1962, the year the artist was part of the Spanish Pavilion of the 32nd Venice Biennale, this series takes a cue from the somewhat brash and chaotic work of Hans Hartung and Franz Kline but is balanced by the discipline and restraint of classic Chinese calligraphy and Japanese sumi-e painting.

The five pieces from this collection all evoke a sense of flight: splashes of black on a white surface are transformed into the wings of ill-fated Icarus, evoke the tension  and terror involved in the birth of Pegasus, or perhaps bring forth the wonder of watching a bird flap its wings as it takes off to the sky. In his paintings, Zóbel gives the viewers a sense of escaping from the mundane and diving into a world of peace and serenity far removed from any form of chaos.

Perhaps it is because his art was a counterpoint to his own life: he was plagued by ill health for decades and suffered from bouts of depression, particularly during those times when he felt fettered to the corporate world and to conservatism in general; painting gave him the opportunity to escape the pain and the loneliness even for a short while—and to offer others a similar route of release. As he himself said, “The artist communicates from a point of loneliness and his thought is received in loneliness.”

Zóbel was more than just an artist; he was also an avid collector who supported other Filipino artists in every way that he could. It was, most likely, his way of establishing peace with himself and the world around him. With that in mind, given the chaos of the modern world, perhaps Zóbel’s work will help a new generation find a sense of peace, calm, and contentment.

Zóbel: Contrapuntos formally opened on 13 May and will be on display until 26 November 2017 at the Fondaco Marcello, Calle de Traghetto o Ca’ Garzoni, Venice.